Over 30 combined years of work in public policy, urban planning and design

See all of our work → 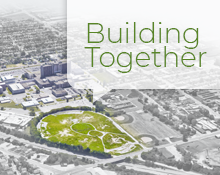 A Community Vision to Inform the Future of Kensington Heights

In May 2018, Erie County Medical Center (ECMC) purchased the former Kensington Heights property from the Buffalo Municipal Housing Authority and made a commitment to engage nearby residents and community partners in shaping the site’s future. To help with that process, they invited the UB Regional Institute and our colleagues from the UB School of Architecture and Planning to provide preliminary planning support to meet that goal. 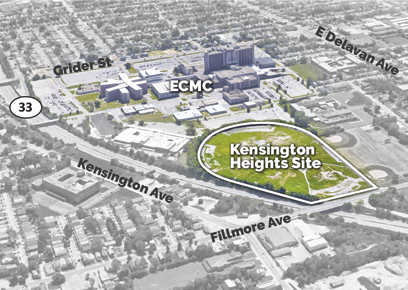 Kensington Heights is a 17-acre site adjacent to Fillmore Avenue, the Kensington Expressway (Rte. 33), Glenny Park, and the ECMC campus.
For much of its developed history, it served as the site for a public housing complex known as Kensington Heights or the “Glenny Drive Apartments.” Built in the 1950s, the complex included six seven-story towers built primarily to house residents displaced by the construction of the Kensington Expressway. By the end of the 1970s-just two decades later-Kensington Heights was two-thirds vacant, and in a state of disrepair. The towers closed in 1980 and stood empty for three decades until their demolition began in 2012.
For decades, Kensington Heights served as an emblem of the flight of people, jobs, and capital that left its surrounding neighborhood during the second half of the 20th Century. When ECMC purchased the site in 2018, however, it gave this centrally located site a new lease on life. ECMC is currently working with the NYS Department of Environmental Conservation to clean up the site, and through this community-driven planning process, is looking for new opportunities to leverage the site for community revitalization.

Working with UBRI to develop a community vision to inform the site’s future
Over the summer of 2019, UBRI guided a comprehensive visioning process to understand what neighborhood residents and stakeholders want for the site’s future. Guided by a 16-member Community Advisory Committee (CAC) convened by ECMC, the engagement involved a comprehensive on-the-ground effort to talk to neighborhood residents about their ideas and aspirations for the site. Outreach was led by a team of graduate assistants from the UB School of Architecture and Planning and involved 7 meetings with the CAC, tabling at 15 local events, 8 community conversations with neighborhood groups, 2 youth-oriented engagement activities, and a door-to-door canvassing exercise aimed at engaging local businesses. Over this span, more than 620 members of the community shared their ideas and aspirations for the site.
The findings of this engagement process were summarized in “Building Together: A Community Vision to Inform the Future of Kensington Heights.” The report provides a synthesis of research and community engagements and serves as a guiding document to advise ECMC in its next steps in redeveloping the site.

Engaging faculty and students to explore the site’s future.
In the fall 2019 semester, students from UB’s Master’s in Urban Planning, Masters in Science in Architecture, and Master’s in Real Estate Development programs participated in an interdisciplinary studio course focused on developing potential design and development strategies for the site and its integration into the ECMC campus. Led by Dr. Ernest Sternberg, Hiro Hata, and Eric Recoon, the studio looked to incorporate ideas from the visioning process into development proposals, while also offering recommendations on how ECMC can better integrate the site into its broader campus.